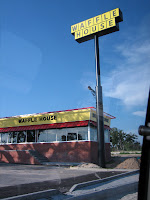 After five days in Louisiana and Mississippi, I can honestly say that I understand Paula Deen. In fact, her food is probably considered "health food" judging by what I saw of southern cuisine. First, the old timey Waffle House, a diner with counters and uniforms right out of the old tv show "Alice" -- it's the southern version of Denny's, but as ubiquitous in the South as Starbucks is in the North.

Very inexpensive and traditional Southern style breakfast with waffles, eggs of all sorts, grits, chili, hashbrowns, steak, biscuits and gravy. Anything you think of as very southern. For example the "real" hashbrowns can be smothered (in onions), covered (in American cheese), chunked (with ham), capped (in mushrooms), topped (with chili) or "all the way" which is undoubtedly the way most people order them.

My favorite thing at the WH was the waffle with pecans which was recommended to me by my hosts as the thing most craved by their southern belle turned yankee daughter. This was the first place I tried Southern style grits and I have to say they are a lot better than any grits I have had above the Mason Dixon line. They were creamy and I don't dare guess how much butter or cream went into their creamy goodness. 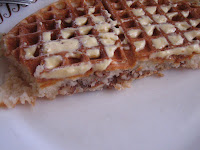 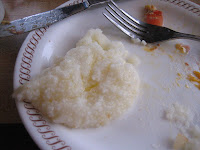 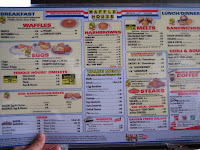 I finally tried red velvet cake, which was o.k. It's cake, I'm not sure what flavor it's supposed to be because I'm so taken aback by it's color, but in any case it's fine and the look is unique. Beignets at Cafe Du Monde were good enough to have them twice in one day. That's right! Once in the mid morning and again at night. Very similar to the fried yo-tiyaw in Taiwan, but covered in a blanket of powdered sugar. Rarely does anything with powdered sugar taste badly. These were freshly fried and that day I ate a total of six of them -- marathon be damned. 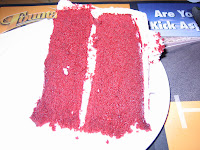 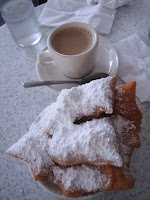 The other treat was the incredibly flavorful steak at Besh Steak. This was a complete surprise because we ate there only due to the fact that Galatoire's was closed for 4th of July week (I guess everyone needs a vacation once in a while). The Rib Eye au poivre was excellent, I soaked up every drop of the peppery sauce with my steak. The steak itself was probably too good a quality and well seared to be covered in a strong sauce, but hey it tasted fantastic. The Cowboy steak was a 33 oz. bone in Rib Eye. Super juicy and split onto two plates so that there was nice caramelization and medium rare goodness through out. The juiciness and beefy flavor of the cowboy was among the best I've ever had, but I like the spiciness of the au poivre, so it's a toss up. I'd definitely go back to this place. 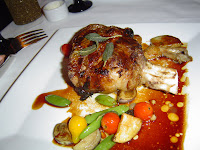 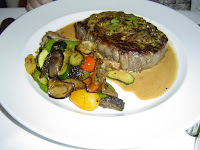